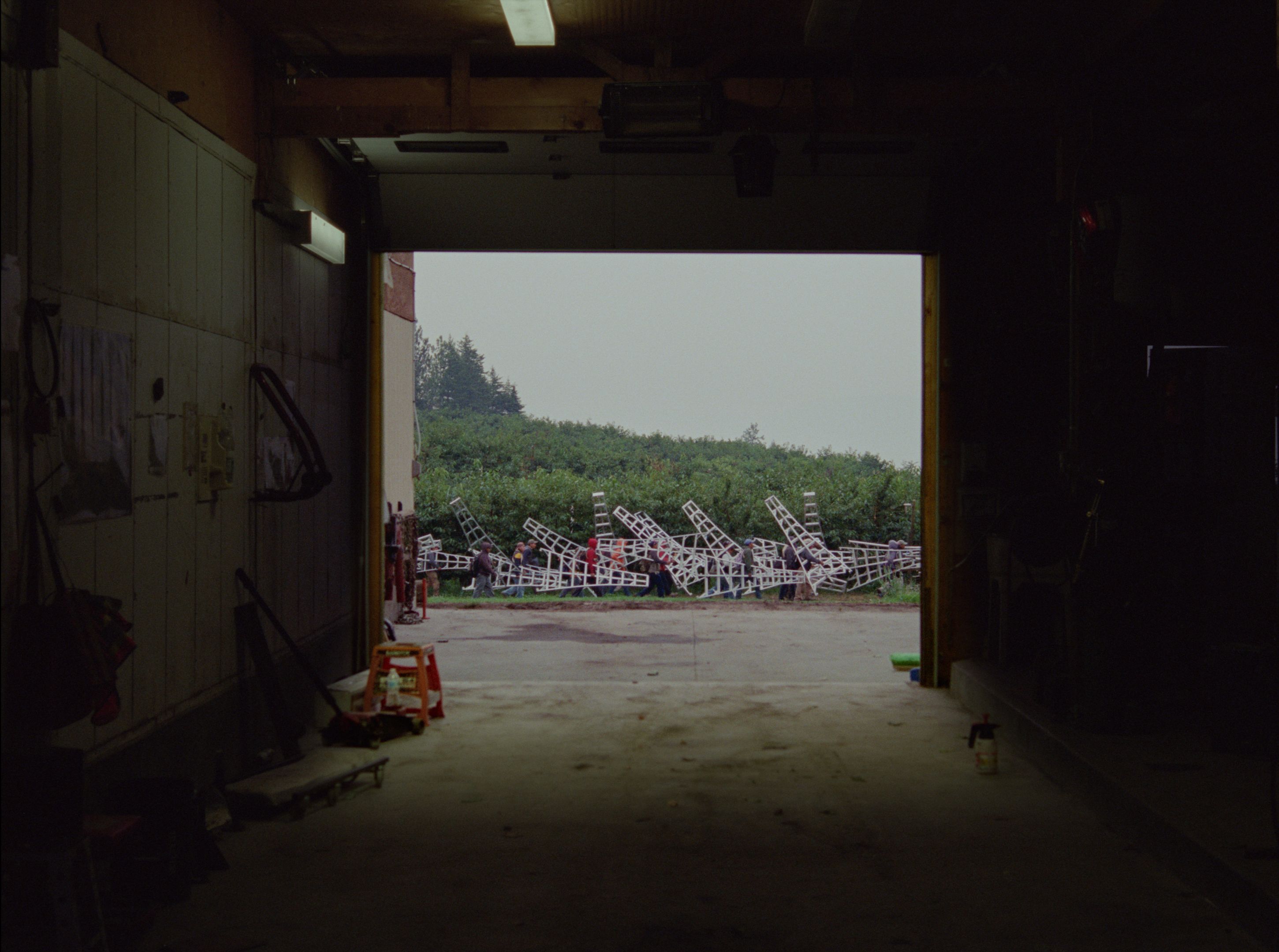 The movement of matter is never explicit. This program brings together three works that launchinquiries into the movement of matter as collaboration. Each with a distinct methodology, from cinematic documentary, earthquake as accomplice, to black liberation, and connecting histories of trade, optics, and art.
—Steffanie Ling

Labour/Leisure, Ryan Ermacora and Jessica Johnson
North American Premiere, Canada, 2019, 35mm > digital, 19 min, English/Spanish
The Okanagan Valley in the Southern Interior of British Columbia is marketed as a destination of leisure, recreation, retirement, and wealth. Behind this facade is a largely invisible agricultural labour force, comprised of temporary migrant workers from the global south.

Serpent Rain, Arjuna Neuman and Denise Ferreira da Silva
Toronto Premiere, Norway, 2016, digital, 30 min, English
When prompted by a philosopher to make a film without time, the result is a video that speaks from inside the cut between slavery and resource extraction; between Black Lives Matter and the matter of life; between the state changes of elements, timelessness and tarot. Also see 4 Waters: Deep Implicancy at Gallery TPW.

Sunstone, Filipa César and Louis Henderson
North American Premiere, UK/Portugal, 2018, digital, 35 min, English/ Portuguese/Spanish
A colonial and visual history of optics conveyed with a strata of 16mm film, desktop screen captures and 3D CGI. Contrasting the system of triangular trade with the political potential of Op Art in post-revolutionary Cuba, Sunstone examines the diverse social contexts of optics, divulging a spectrum of humanist pragmatism, discovery and oppression. Also see All That Is Solid.

Ryan Ermacora is an award-winning filmmaker based in Vancouver, B.C. His work investigates the visible and invisible ways in which humans have engraved themselves into natural spaces and is informed by an interest in avant-garde depictions of landscape. His work has screened at the DOXA Documentary Festival, The Edinburgh International Film Festival, WNDX and VIFF.

Jessica Johnson is an award-winning experimental filmmaker based in Vancouver, B.C. Her films have played at Vancouver International Film Festival, Festival du Nouveau Cinéma, Images Festival, WNDX, and internationally, in cities such as Edinburgh, Trento, and Leiden.

Dr. Denise Ferreira da Silva is a Professor and Director of The Social Justice Institute (the Institute for Gender, Race, Sexuality, and Social Justice) at the University of British Columbia. Her academic writings and artistic practice address the ethical questions of the global present and target the metaphysical and ontoepistemological dimensions of modern thought.

Filipa César is an artist and filmmaker interested in the fictional aspects of the documentary, the porous borders between cinema and its reception, and the politics and poetics inherent to the moving image and imaging technologies.

Louis Henderson is a filmmaker who is trying to find new ways of working with people to address and question our current global condition as defined by racial capitalism and the ever-present histories of the European colonial project. Their working method is archaeological.